“An Isle Clept Tracoda” is an excerpt from “Mandeville Pentacle” which features five passages taken from “The Travels of Sir John Mandeville,” one of the most popular books of the late Middle Ages. The unknown author claimed to be a British knight who had traveled to the Holy Land as a pilgrim and then gone on to India and China. Much of the book is an artful compilation of earlier accounts by others. (Mandeville—if he ever existed—seems to have been, like me, an armchair adventurer.) Descriptions of fabulous creatures and people are set alongside accurate observations of places and practices a traveler may still see today. Sound processing techniques used include phase vocoding, convolution, granular synthesis, resonant filters, and the speech synthesis process known as concatenation.

(2010)
For violin and cello by David Claman.
Performed by Susannah Chapman and Calvin Wiersma, violin.

Duos get at one of the most basic aspects of musicians playing together, the interaction of two parts, which suggests the relationship of two people. The title comes from an expression young people used when I was growing up. While describing a close friend, they would raise one hand with index and middle fingers pressed together and announce, “We’re like this.” The gesture telegraphed their relationship immediately. While traditional classical composition tends to value the interaction of independent voices, here I wanted the violin and ‘cello parts to be more closely linked to one another. But as in human relationships, this cannot hold. The parts also diverge and shift away from one another throughout.

(2011)
Excerpt from “Variations on Syama Sastri’s ‘Amba Kamakshi'” by David Claman. Performed by Tara Helen O’Connor and Ian Rosenbaum at Tenri Institute in New York in 2017.

So I spent several weeks making a detailed transcription of a recording of the song “Amba Kamakshi” in Yedukula Kamboji Raga sung by my friend, Smt. Sankari Krishnan. I planned to write an academic paper about the piece and its unusual form, known as Swarajati. But I soon began to see the piece’s compositional possibilities and like most composers, I wanted to mess with it.

The result, for alto flute and percussion, played here by Tara Helen O’Connor and Ian Rosenbaum, is a work that is part tribute and part invention. As a nod to Tara and her Irish heritage, I also interpolated a phrase from an Irish jig of my own invention. Alongside Syama Sastri and Sankari Krishnan, I consider myself a co-creator of this new work.

(And yes, I did eventually write the academic paper.)

In 2002, John and Ryan asked me to write a piece for their duo. Initially I had difficulty conceiving of interesting ways for the two pianists to interact. The Winter Olympics were on television at the time and I thought I might get some ideas by watching figure skaters in pairs. But I found the skaters’ routines rigid, lacking in originality, even tedious. Their strived-for ideal of perfectly controlled and unified interaction induced a feeling of claustrophobia in me. I wanted the pianists to interact more like real people. The image of two pianists sitting side by side, trying not to bump elbows or get in each others’ way, suggested discomfort, tension, and humor, but also the potential for great power and complexity. Thus John and Ryan’s parts are sometimes harmonious, sometimes out of synch, and sometimes at odds with one another. 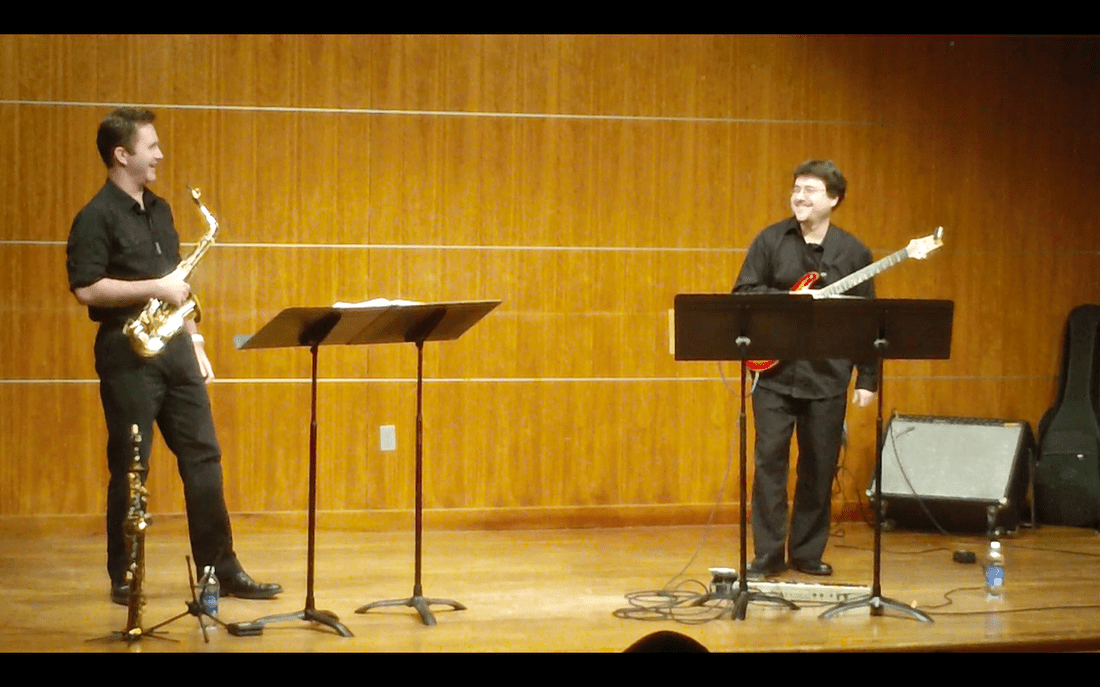 “Aasai Neelaavey” traveled a long road before assuming its present form. While living in Chennai (a.k.a. Madras) India in 1999, I decided to try my hand at setting some Tamil lyrics to music. The original poem was by Mr. S. Vaidheewaran who I met through Dr. K.S. Subramanian and mournfully ponders a lost love. I “tuned” the poem with a couple of South Indian classical (Karnatik) singers in mind and thus the melody has a firm tonal center and a near-modal quality. The rest of the ensemble used a simple rock band format with drums keyboard, bass, and guitar, but the project was never completed.

After returning to the U.S. I was unsuccessful in attempts to find a Karnatik singer who could sing the melody and read Western notation. A few years passed but the melody stayed with me. I revised and rewrote the song for alto saxophone and guitar for Christopher Creviston, Noa Even, and Oren Fader. Not surprisingly, the piece retains its songlike character. The rhythms of Tamil, however, give the melodic line a quality it would not have otherwise. In any event “Aasai Neelaavey” means “lovely moon.” 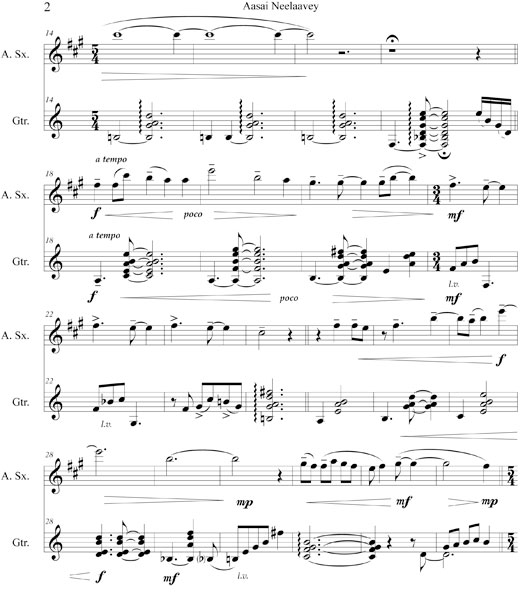 Liberties Taken (with Sahana Raga Varnam) began as a transcription, but deviates significantly from the original South Indian composition of Tiruvottiyur Tyaggaya (1845-1917). The transcription was made from a stunning live recording of a concert given in Amsterdam in 1979 by my vina teacher, Dr. K.S. Subramanian and the peerless T. Ranganathan on mridangam (drum). This piece got stuck in my mind for years, but I was unsure about what, if anything, I’d do  with it. After a few false starts I found ways to preserve much of the original character of the piece while adding new elements. The result, performed here by The New Thread Saxophone Quartet, incorporates detailed transcriptions, subtle and gross alterations of the original, freely composed interludes, a modulating drone, and harmony and counterpoint not found in Indian classical music. These sections contrast and commingle with one another. The score properly credits Tiruvottiyur Tyaggaya, Dr. Subramanian, and myself as co-composers.

“Liberties Taken” was commissioned by The Fromm Music Foundation at Harvard University.

“Canon est regula voluntatem compositoris sub obscuritate quadam ostendens.”
(A canon is a rule which shows the intention of the composer in an obscure way.)

“What does it mean to engage in canon formation at this historical moment? In what ways does the prevailing crisis in the humanities impede or enable new canon formations?”

Loose Canons was written in response to the music of Johannes Ockeghem (ca. 1410-1497) in particular to his Missa Prolationum, which consists of a series of canons in different time signatures and at different intervals of imitation. Ockeghem’s music has been described as idiosyncratic, without system, even as ‘sounding improvised.’ On the other hand, he has been characterized as a “pure cerebralist, almost exclusively preoccupied with intellectual problems.”

Like other composers of the time, Ockeghem was trained as a singer and his music was vocally conceived. In our time composers are often trained, or self-taught, as electric guitarists and the electric guitar could even be described as the voice of our era. Loose Canons downplays the usual rock-star effect and pyrotechnics and focuses instead on sound.

Loose Canons utilizes a device known as an ‘ebow’ (electric bow) which the guitarist holds above the strings, causing them to vibrate indefinitely without being plucked. Thus traditional contrapuntal activities like passing tones and suspensions can be greatly prolonged, which both exaggerates and disarms their power and function. In addition, as the distorted guitar sounds interact with one another, rich patterns of overtones and dissonances are produced, beyond the written notes of the piece. 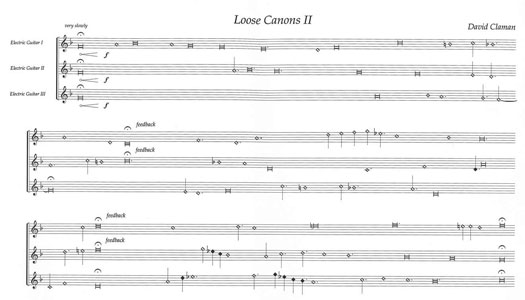 UnPact (2003) In 2002 John and Ryan asked me to write a piece for their duo. Initially, I had difficulty conceiving of interesting ways for the two pianists to interact. The Winter Olympics were on television at the time and I thought I might get some ideas by watching the figure skaters in pairs. But I found the skaters’ routines rigid, lacking in originality, even tedious. Their strived-for ideal of perfectly controlled interaction induced a feeling of claustrophobia in me.

I liked thinking of the pianists as two characters but wanted them to interact more as real people do. The image of two pianists sitting side by side, trying not to bump elbows or get in each other’s way suggested discomfort, tension, and humor, but also the potential for great power and complexity. Thus John and Ryan’s parts are sometimes harmonious, sometimes slightly out of synch, and sometimes at odds with one another. 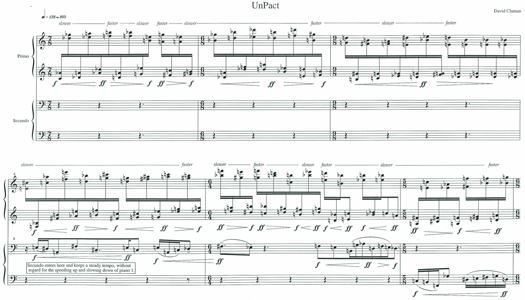 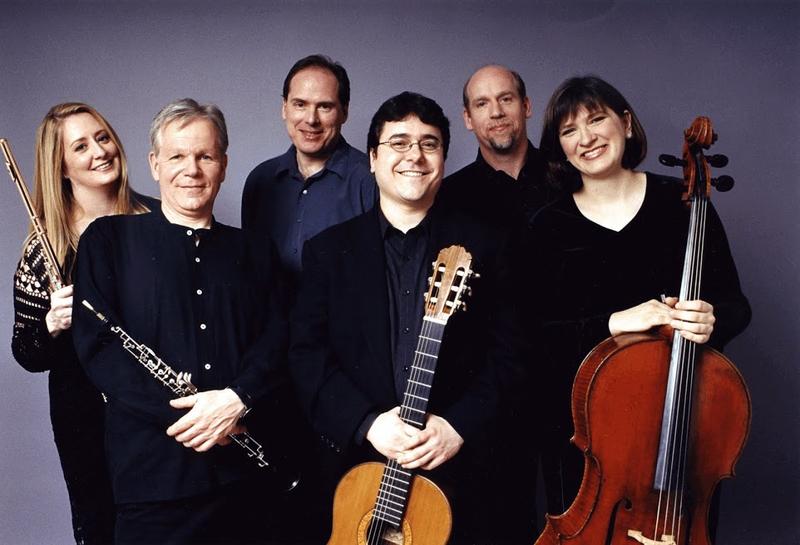 Engish Medicine is one of five pieces that make up the suite Gone For Foreign written for The Cygnus Ensemble in 1998-1999. The suite was commissioned by The American Composers Forum and premiered at Merkin Hall in New York in 2000. The piece was recorded for Bridge Records and released on CD in 2005. Much of the piece was written in Chennai, South India while I was living there on a grant from The American Institute of Indian Studies.

The titles of the movements are taken from the Indian English dialect used in Southern India. “Gone for foreign” means “gone abroad,” usually for work or education, as in, “My brother has gone for foreign.” “English Medicine” simply refers to Western medicine, as opposed to indigenous Indian forms such as Ayurvedic or Siddha medicine. These titles obliquely suggest the odd experience I had of composing contemporary American music in South India.

I believe that the music I wrote was altered—much like the English language in India—in interesting and surprising ways due to the cultural context and environment I inhabited. 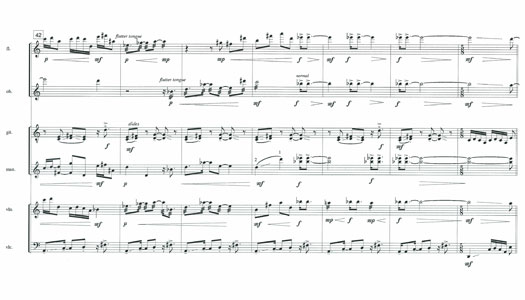 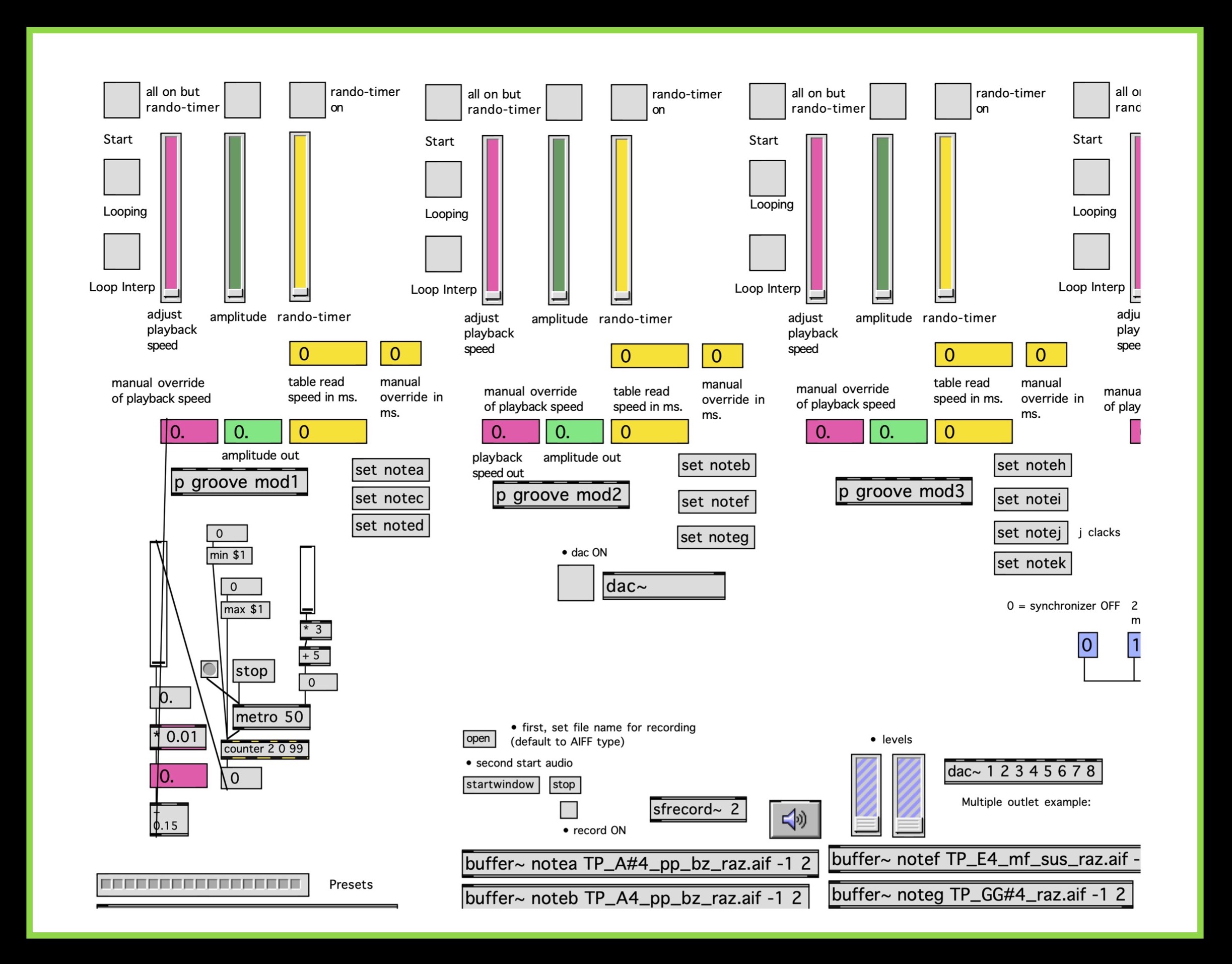 “Piece of Work” is for live improvisation using toy piano samples. It uses a Max/MSP patch I wrote. (Thanks to Matt Ostrowski at Harvestworks for the great Max/MSP tutorials. Highly recommended.) A series of events led to the composition of this piece and also followed from it. While teaching a course on experimental music in 2002, I became reacquainted with John Cage’s wonderful toy piano pieces and wanted to write something new for toy piano, but using samples and electronics rather than an acoustic toy piano.

I began scouring the web for toy piano samples. Free samples of just about any other instrument were available–this was in 2004–but not toy piano. I asked Matt Malsky at Clark University to help me record toy piano sounds and these have been used to create this piece. These samples were subsequently posted on the internet for others to use and the Extensible Toy Piano Festival (XTP) and other performances developed from this.

This piece has four tracks that loop the toy piano notes. The loops can be independent of one another or linked. Playback volume, speed, and tempi can be adjusted, creating a kind of primitive polyphony which often sounds remarkably complex. I sometimes made use of that ambiguous area of auditory perception where rapid pulses begin to be perceived as low-frequency pitches. The obliquely humorous title refers not only to the fact that artistic creation is, in fact, labor and ought to be compensated as such but also to a former colleague whose behavior frequently elicited the selfsame exclamation from others. 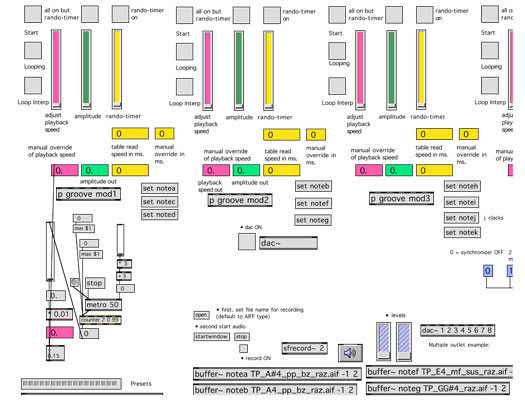