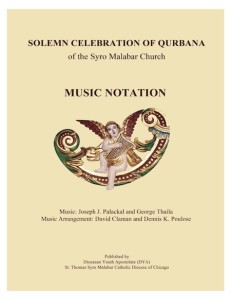 In 2014 and 2015, I worked with singer and composer Father Joseph Palackal, helping to arrange and harmonize a mass he composed, which was published in the summer of 2015. The mass uses the Syro-Malabar Rite used in parts of Kerala, India. It was quite an interesting and challenging project. Some of the pieces were in South Indian Ragas, and a few were in the Aramaic language and used ancient melodies. I enjoyed working with Father Joseph, and look forward to hearing performances of this work.